Min-Jung is a minor character in Sense8 season one, played by Yuh-Jung Youn. She is one of Sun Bak's cellmates, along Soo-Jin and Lina.

Min-Jung got married at a young age of 22, where she felt lucky for. Eventually, her husband lost his job and started drinking, and then beating her. His husband continued drinking and beating her for an unknown amount of time. After some time of terror, she put rat poison in his bibimbap and killed him, which caused her arrest at Cheongju Prison.

When Sun Bak is brought to her cell, the prisoners recognize her as "the embezzler". Min-Jung remarks about the shame she caused to her father and brother, congratulating her for it, much to Sun's surprise.

Afterwards, the cellmates have some tea together, as they talk about their past lives. Recalling the terror of being beaten, Min-Jung states that every moment in prison spent free of her husband is a gift.

We Will All Be Judged by the Courage of Our Hearts[]

While Sun is at isolation due to her fight with Prisoner 818, Min-Jung brings her a meal. She softly utters her a comforting "We know what you did for Soo-Jin." before leaving. Along the chopsticks, they had included a paintbrush, a gift that makes Sun smile lightly.

The night Sun is abruptly awaken and taken by fake guards to a backroom, Min-Jung finds suspicion and follow them.

After the guards attempt to lynch Sun, Min-Jung took a broken broomstick and jabs one of them in the abdomen, freeing her cellmate. Watching Sun take out the remaining two and take the keys, the two escape together, taking a bus through the streets of Seoul and abandoning it in a parking lot. They use an old truck and travel to an old friend's apartment that Min-Jung suggested. Mrs. Cho greet them happily and allow them inside.

Resting there, they eat Mrs. Cho's cooking and listen to the story of how she used to own a restaurant in Seoul. Due to her husband's unpaid gambling debt, Mrs. Cho was forced to run drugs for her husband's loan sharks. She was caught, arrested for drug smuggling, and sent to prison, where she and Min-Jung met.

One night, she joins Sun on the rooftop to have a smoke; Min-Jung acknowledges that Sun's attackers had to have been hired by her brother, chuckling at the thought. When Sun asks why it was good, Min-Jung answers that it means Joong-Ki fears his sister. Then, she reflects on a comment Soo-Jin made about Sun, how her heart was a soft as a baby bird, saying that it was what made her like Sun upon first meeting her. She says that a piece of her would enjoy Sun's revenge for what he did to her father but asks that her revenge not corrode her beautiful heart.

One afternoon of rainfall, Mrs. Cho receives an unexpected visit from Detective Mun and his partner. They tell her that her neighbors found two prison uniforms in her trash and made a report. Sun and Min-Jing hide in a nearby room as the detective and partner search the premises. When Mun's partner enters the room with Min-Jing, Sun knocks him unconscious. An alert Mun enters the room and find Min-Jung in the corner, hands in the air and visibly frightened. He, soon, diverts his attention to a runaway Sun.

When Mrs. Cho and Min-Jung return drenched but unharmed, they congratulate her on her skills. Sun tells Min-Jung they have to leave, but Min-Jung declines, telling her that while freedom was delicious, she does not feel like running with Sun anymore. She adds that she is already serving life in prison and that they cannot make her sentence any worse. Min-Jung says to go get her revenge, making sure to give her brother a little pounding for her and Mrs. Cho. 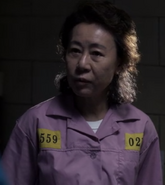 "Whatever you do child, do not let it be at the cost of your beautiful heart."
--Min-Jung, to Sun.