Jonas Maliki, portrayed by Naveen Andrews, is a major character in the Netflix series, Sense8. Jonas, after the birth of Angelica's new cluster, sought Nomi Marks and Will Gorski, acting as a guide through their strives as reborn sensates. Ultimately, he is captured by Whispers and becomes a pet and messenger.

When Whispers is taken out of the picture, he becomes an essential personnel to BPO, as they become untrustworthy of him.

Jonas mentions to Will that he was born in India, raised in England, and moved to New York in his twenties. He and Angelica were in a relationship and members of the same cluster.[1] Some time after his rebirth as a sensate, Jonas spent time with Angelica in a cabin, the first place he considered a home.

During season one, he visits Will and persuades him to rescue his other self, Nomi, from a scheduled lobotomy in San Francisco. He acts as a mentor to the new sensates, explaining concepts such as visiting and sharing, as well as their mental link. Nevertheless, his motives are unclear.

According to Yrsa, Jonas and Angelica worked for Whispers birthing clusters in order to identify and hunt sensates. However, this hasn't been confirmed.

Angelica is seen in the church, in pain. She reaches up for help, and Jonas takes her hand. Jonas comforts Angelica, and presses Angelica to perform the birth, saying "it has to be now." Jonas also says "They'll be hunted, born or unborn. At least you can give them a fighting chance." Angelica performs the birth and tells Jonas, "Protect them". Shortly after, Whispers visits Angelica, although he and Jonas cannot see each other. Whispers then finds Angelica in the real world, and Angelica commits suicide.

While riding in the Pride parade, Nomi Marks makes eye contact with Jonas, causing Nomi to pass out. Jonas later visits Nomi while she is in the hospital, and informs her that Dr. Metzger is planning to perform a lobotomy on her, and that she needs to escape as soon as possible.

At Will's precinct, a federal agent meets with the entire team to talk about a wanted criminal, Jonas Maliki. Will recognizes Jonas, but he doesn't know how.

A few days later, at a convenience store in Chicago, Jonas finds Will and introduces himself. Jonas says that Angelica told him about Will. Jonas tells Will, in very vague terms, what it means to be a sensate. Then Jonas says he needs to leave to catch a plane, and that Will needs to help a girl named Nomi in San Francisco. Will tries to restrain him, but Jonas easily dispatches him. They engage in a car chase, during which Will experiences his first visitation. Jonas tries unsuccessfully to convince Will not to pursue him, and the car chase ends with both cars crashing.

Smart Money Is on the Skinny Bitch[]

Will wakes up in a hospital, and learns that the "terrorist" Jonas is in custody.

Will attempts to use his police connections to meet with Jonas personally. He fails, but then visits with Jonas who is being held in solitary confinement. Jonas discusses the mechanics of visiting and sharing to Will, and says, "you are no longer just you." Jonas tells Will that he needs to save Nomi, right before Jonas is taken away by a team of men in gas masks.

Jonas is a prisoner in a BPO lab, restrained in a chair and with electrodes connected to his head. Will visits with Jonas to discuss his latest findings on BPO. Jonas mentions, "I've been unconscious so long, I could be anywhere".

Will visits a museum and has a visiting conversation with Jonas, who is still a prisoner in BPO's lab. Jonas talks about what it means to be a sensate, and how sensates are a separate species from humans. He also discusses nature and evolution, and why humans feel threatened by the existence of sensates.

Just Turn the Wheel and the Future Changes[]

Jonas visits with Nomi and Will while the two are discussing plans for rescuing Riley. Simultaneously, Jonas is strapped to a chair with Whispers standing over him. Whispers is able to hear most or all of what Jonas says. Whispers tells Jonas not to give away too much information to the others, otherwise they might not trust it. Jonas mentions that the reason Whispers knows about Riley, is that he read the thoughts from Jonas. Jonas warns Will and Riley to be careful with Whispers, as "he is very good at manipulating people." It's not clear whether Jonas is helping Will and Riley, or helping Whispers to manipulate them.

Jonas visits Will while he is driving to the Iceland lab. Jonas warns Will that Whispers has just climbed in to a helicopter, and that Whispers knows that Will is there. During the escape, Jonas taunts Whispers that things aren't going according to his plan. The team wonders how they will escape from the lab, and Jonas says he has a man on the inside who will fake a heart attack, which will bring an ambulance that the team can steal. As Will infiltrates the lab, Jonas continues to feed information to Whispers about Will's status, as well as informing Will about Whispers. At one point, Jonas is seen being tortured by electric shock, which allows Whispers to read his thoughts and discover that Will plans to escape via ambulance.

When Riley and Will are on the mountaintop, Jonas visits Will and presses him to commit suicide, to keep his cluster safe from Whispers!

Jonas visits Will while Will visits Whispers somewhere in England. Jonas explains that Whispers uses pills called "blockers" to inhibit psycellium. Whispers takes one of the blockers, and Jonas and Will visit with each other directly. Jonas explains that BPO has sensate collaborators and that sense and memory transfer with a sensate birth. As the BPO staff work to cut Jonas' connection with Will, Will asks about Whispers' cluster.

Jonas was one of the people to visit Sara Patrell's house.

Will and Nomi negotiate a meeting with Jonas through Croome. Jonas congratulates Will on outmaneuvering Whispers. Jonas recounts his sensate birth and first meeting with Angelica. Jonas goes on to describe Angelica's first subcluster, Todd's reservations about being a sensate, and Raul Pascal's disappearance. Jonas claims that Angelica began working with Whispers when she went to Chicago searching for Raoul. Jonas warns Will not to trust Croome.

Will and Nomi visit Jonas as he is wheeled into a BPO surgery. Jonas apologizes to them, thinking that his time being useful to BPO has ended. Angelica comforts him as BPO saws open his forehead.

The August 8 cluster visits Nomi in San Francisco and concludes that Jonas is dead.

Isolated Above, Connected Below[]

In a memory, Angelica explains similarities between sequoias and sensates to Jonas.

In a different memory, Angelica argues with her subcluster about Nazi-esque tactics on the part of BPO. Jonas offers to go to Iceland to investigate; Whispers watches Angelica in silence.

I Have No Room In My Heart For Hate[]

As Will approaches Whispers' house, Jonas visits Will and questions if he's "ready to kill a man in cold blood."

All I Want Right Now Is One More Bullet[]

Nomi and Will question how Jonas survived the surgery without becoming a zombie. Jonas admits to making a "deal with the devil" with the chairman of BPO. Jonas is no longer in BPO custody and appears to have an apartment. The August 8 cluster surmises that Jonas is keeping an eye on Whispers for the chairman of BPO.

Jonas appears to have visited Carol Cumberland while she killed herself.

Jonas visits Whispers while Will is beating up Whispers. Will tells Jonas to choose which side he's on, while Jonas responds that Will doesn't understand the choice Jonas is making. Jonas calls BPO to warn them about Will being inside the parliament facility. Before he can say much, he is knocked out by Sun and kidnapped.

Jonas is a mysterious man with questionable goals. When he first interacts with the August 8 cluster Jonas appears calm, cool, and collected, easily defeating Will in a short fight and attempting to help Will and Nomi. Jonas‘s personality has very much been shaped by his interactions with Angelica— he quotes her constantly. When Jonas isn’t being vague, mysterious, or controlled by Whispers/the BPO he has a slight amount of sass, commenting to Whispers that he loves games while being tortured.

Jonas next to Angelica 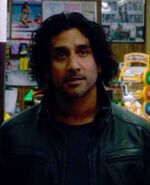