Felix Berner is a recurring character in Season One and Season Two of Sense8. He is a childhood friend to Wolfgang Bogdanow and the closest ally as well as partner in-crime in Berlin.

After Hassan Bogdanow's funeral, Felix plotted alongside Wolfgang to steal and sell diamonds that Steiner had been planning to profit. When a merchant disappears, he becomes a target from Steiner's assault, hospitalizing him for some time. Having been avenged, he reawakens, learning that the two have new friends.

Meeting with club owner Sebastian Fuchs, Felix is gifted ownership of the establishment, informed that he would need to keep the business afloat.

In school Felix was frequently in detention calling it "his office". While there he met Wolfgang and they became close friends. Felix was extremely loyal to him throughout their childhood. When Wolfgang was jumped for being from East Germany, Felix attacked the other boys with a pipe (We Will All Be Judged by the Courage of Our Hearts). Conan the Barbarian was one of his favorite movies and he watched it often. Felix was able to recite every line. One night Anton Bogdanow hit Wolfgang and mocked him for crying. Felix hit him over the head with a bottle and the two boys left together.

Prior to 2015, Felix became the owner of a locksmith shop in Berlin. He also started working as a thief alongside Wolfgang. In Limbic Resonance, they use a key cut at the shop to get in to an art gallery and steal diamonds. Wolfgang manages to crack the safe and they leave as Steiner is breaking in to the building. They later sell the diamonds to a merchant named Abraham who they meet at the Garden of Exile. While there Felix discusses the holocaust, the obedience of society, and revolutions. He says that this diamond score is the beginning of their revolution.

They leave the monument with Abraham to finish their deal. The buyer agrees to purchase a third of the diamonds and Wolfgang gets him to buy half. Afterwards, Felix tells a story about the time he lost his virginity. Saying that he bought new shoes, celebrating his first intercourse. Felix suggests that they should celebrate their new riches by buying new shoes. At a fancy restaurant, Felix orders the most expensive wine on the menu saying he wants to live like a Russian billionaire for one night. Later that evening they go out dancing and Felix convinces Wolfgang to do 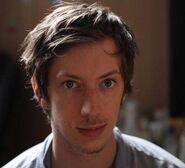